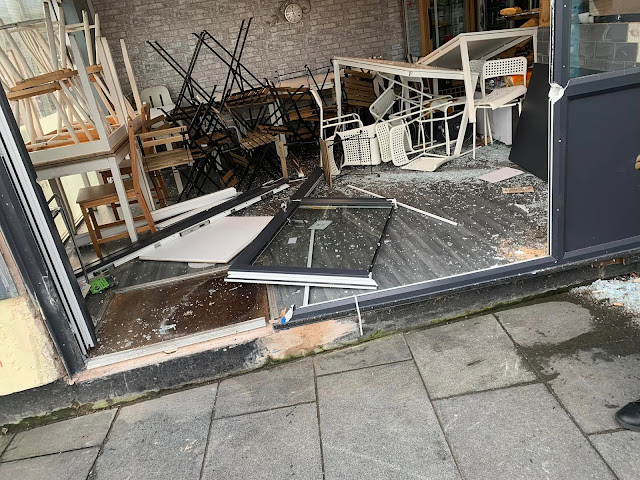 Strange thing to happen as the area is pedestrianized! Rumors have it that the car was reversed into the Cafe purposely.

A CAFÉ in Colwyn Bay has had to close temporarily after suffering a great deal of damage from an act of vandalism last week.

Station View Café, on Sea View Road, was boarded up following the incident, which took place on Thursday evening (January 19).

The owner of the café, located opposite Colwyn Bay’s train station, said its closed circuit television system (CCTV) showed that a car reversed into the front of the premises.

The café owner said: “Who the driver was, I don’t know. At this point, we don’t know that much information.

“The majority of the new window frames and door were taken out, and stuff inside was damaged. We’ve got it boarded up, because all we’ve got left is half of a shop frontage.

“We’d just had it re-done, with new tables. It was just devastating inside. We came down on Friday and just didn’t know where to start.

“We’ve cleared most of the glass up, because it was everywhere, but we’re still finding stuff that’s been damaged. Hopefully, it shouldn’t be long (before they’re ready to re-open).

“If Conwy County Borough Council had replaced the bollards that should have been up, and locked, there wouldn’t have been any vehicles on here, but they’ve been missing now for a good two years.”Damage at Station View Café (Image: Submitted)

The café owner said they did not yet know how much it would cost to repair the damage, adding that North Wales Police was made aware of the incident.

A North Wales Police spokesperson said: “We were called at 9pm on Thursday to report extensive damage to the front of Station View Café on Sea View Road, Colwyn Bay.

“Officers attended the location and after some CCTV inquiries in the area, two people were arrested on suspicion of causing criminal damage and for driving offenses.

“One vehicle was also seized. Our investigation into the incident is ongoing.

“Anyone who saw anything suspicious on Thursday evening in the area of Sea View Road or Ivy Street is asked to contact us via our website or by calling 101 quoting reference number 23000056862.”