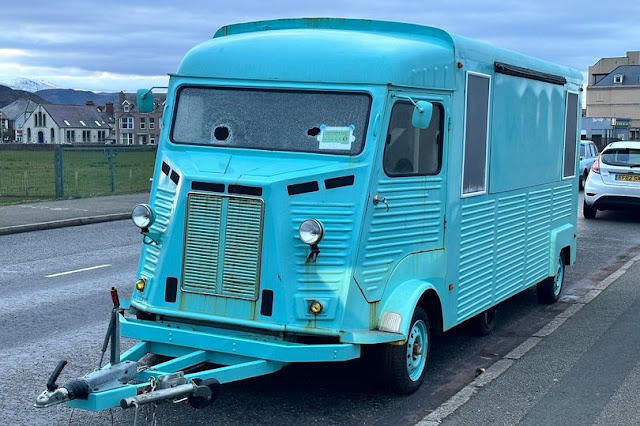 People forget that Llandudno has a murky underbelly and a high crime rate but they just keep sweeping it under the carpet! Not a nice thing to happen, senseless vandalism.

Welsh apprentice winner Alana Spencer has been left 'gutted' after her 'Ridiculously Rich on the Road' coffee van was damaged. The entrepreneur and baker from Aberystwyth left the van parked up outside her cafe by the paddling pool in Craig y Don, Llandudno.

The coffee van was used at the Llandudno Christmas Extravaganza during November and has lain outside the cafe after damage to its wheel whilst it was being transported back to where it is normally parked in Aberystwyth. Now the front window of the 1966 Citroen H Van has had stones thrown through the window - causing the trailer to require a new window.

The 'queen of desserts' took to social media when she damaged the wheel of the van last year asking if anyone could help with the issue. Unfortunately due to the age of the van, it became a struggle to find a wheel that would replace the damaged one.

This weekend images of the damaged 1966 van appeared on social media in a post that read "If anyone knows the owners of this windows been smashed", Alana responded to the image gutted and in disbelief. She said: "Hello all, it’s my van. Honestly so upset! We can’t get it until next week.

"Been waiting on a part for the tyre that broke and that just arrived. Now we need to fix this. Thank you to all the kind people who have been in touch. As if the business isn’t tough enough at the moment. I really hope they catch who did it because it’s just not ok!!"

Upon purchasing the van in 2021, she told how she had set her heart on having one when she was 17 years old and used to go to food festivals with her trestle table and some apple crates to display her cakes on. She always used to look at the people with the 'pimp vans' and think 'one day Rodney, one day'.

It is unsure if the damage to the van has been reported to North Wales Police but it is understood that the CCTV in the area doesn't cover the specific point on where the van was located. On Sunday, a local resident and fan of Ridiculously Rich attended to the van to cover up the holes to ensure no further damage can be caused.

North Wales Police have been approached for a comment.