Rhos-on-Sea OAPs 'trapped' in flats for months after lift break down! 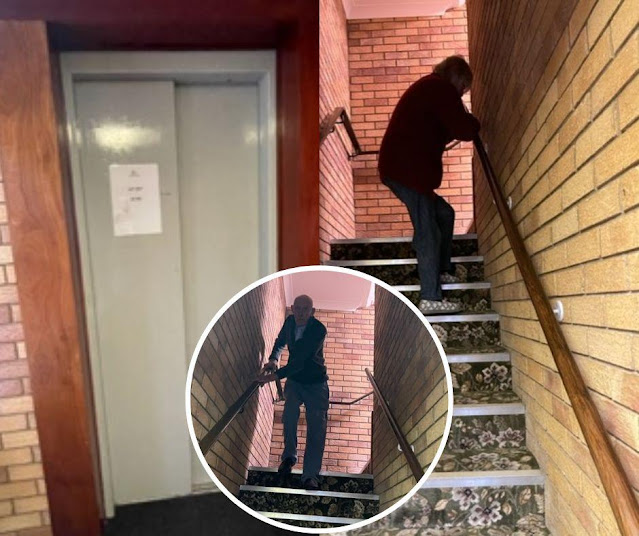 INFIRM and elderly people have been left "trapped" in their flats on the upper floors of a retirement complex after the building's lift broke down.

Emeritus Homes has installed new chair-lifts in the building to provide assistance to the residents on the upper floors while the lift is out of service. However, Stephen Ray, who has lived at Penrhyn Park for nearly five years with his wife Susan and is secretary of the recently formed Residents Association, said many residents feel the installation is "dangerous".Stephen Ray lives at the complex with his wife Susan. (Image: Stephen Ray)

The 69-year-old said: "The stairlift was fitted only at one end of the building but it does go from the ground floor to the top floor in two runs. It does not end on the landings but stops on the last stair tred. This has resulted in residents having to lean over the open stairwell to lift or lower the arm or footrest.

"The lift has been out of action for six months but in truth, there were problems in May so further problems were expected.

"Many residents struggle badly with the stairs, and there are some that simply cannot use them. A lot of residents find the stair lift dangerous and inadequate and of course, residents with walkers or wheelchairs cannot use it at all.

"We have, over recent months, witnessed ambulance personnel struggling to get seriously ill residents to hospital. Also, family members being forced to carry elderly relatives down the stairs. This situation has forced some residents to stay in their apartments for months now, and all this after self isolation for covid.rhyn Park comprises of 38 apartments over three floors.  (Image: Stephen Ray)

"I feel that it is just a matter of time before there is a serious accident and, despite many appeals to Emeritus Homes, the situation continues."

Mr Ray is blind with light perception only.

He admitted that navigating the building has become "more problematic" for him since the lift stop working.Colin Cooper takes a risk on the stairs. (Image: Stephen Ray.)

"We moved here from Craig Y Don where we had lived for approx 15 years," he said.

"It was our intention to retire here and enjoy a quiet life in lovely surroundings."

A spokesperson from Emeritus Homes said: "The passenger lift at Penrhyn Park has been out of action for several months because of the failure of one of the main components. Joy Miller Pyatt tries to get down the stairs. (Image: Stephen Ray.)

"Major work was undertaken on the lift by specialist contractors before Christmas but regrettably this did not resolve all the issues and it remains out of service. Delays have occurred due to the availability of compatible parts which are sourced from abroad.

"We have installed temporary powered chair-lifts in the building to provide some assistance to the residents on the upper floors whilst the lift is out of service. Throughout we have kept, and continue to keep, our residents informed of progress by way of meetings and newsletters.y Miller pictured at the lift. (Image: Stephen Ray)

"We are doing everything we can to put the lift back in to service and we have genuine sympathy for everyone who has been inconvenienced. We will be providing all residents with a further update this week confirming the next steps to putting the lift back into service."

Mr Ray added: "We did receive a newsletter last May which spoke of the renewal of several lifts in their portfolio. At that time they indicated that they were assessing the problems. In July, we received an update letting us know that they were still awaiting assessment. In September, we had a newsletter repeating the July update and again stating that they were almost at the point of generating the exact specification. We had other meetings with Emeritus over this period and were given similar information. Finally, we were given a date of December 19 for the lift to be working again. Although new parts were fitted, we still did not have a working lift. y Miller on the chair lift at Penrhyn Park. Residents have raised concerns about the chair lifts. (Image: Stephen Ray)

"There was talk of acquiring a part from abroad, but this was in August last year, and this idea was abandoned as better options were discovered. On Wednesday (January 11) I received an email from Emeritus outlining the situation, that they had the lift looked at again last week, and now it appears that it needs another couple of parts replaced. We are back at square one.

"I do not think that Emeritus Homes have any conception of the difficulties and hardships they are causing."